Ok, I think I missed last month’s Cake Slice Bakers’ cake. This month was Red Velvet, one of my favorite flavors of cake. I halved the recipe and made cupcakes as between this and TWD, we’re up to our eyeballs in desserts (thank goodness we have visitors!) 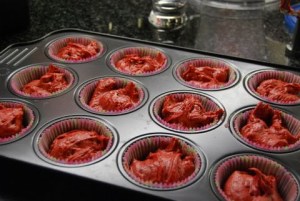 Did anyone else miss where in the recipe instructions the vanilla was supposed to go it? I just added it to the buttermilk. I may have overbaked these a little; the tops were a little crispy.

I was a little skeptical of the frosting, as I always think cream cheese frosting should be put on anything and everything. This frosting is a kind of roux made from milk and flour, added to beaten butter and sugar (does anyone know what “nubbly frosting” is????!!!).

It actually tasted to me like melted vanilla ice cream. Pretty yummy. I omitted the coconut and pecans. Give these a try the next time you’re in the mood for red velvet!

For the Red Velvet Cake

For the Coconut Pecan Icing

To make the cake, heat the oven to 350F. Grease two 9-inch round cake pans and line them with waxed paper to kitchen parchment. Grease the paper and flour the pans.

Prepare three separate mixtures for the batter. Combine the flour and salt in a medium bowl and use a fork to mix them together well. Combine the cocoa powder and the red food colouring in a small bowl, mashing and stirring them together to make a thick smooth paste.

In a large bowl, beat the butter with a mixer at low speed for 1 minute until creamy and soft. Add the sugar and then beat well for 3 to 4 minutes, stopping to scrape down the bowl now and then. Add the eggs one at a time, beating after each one until the mixture is creamy, fluffy and smooth. Scrape the cocoa-food coloring paste into the batter and beat to mix it in evenly.

In a small bowl, combine the baking soda and vinegar and stir well. Use a wooden spoon or spatula to quickly mix this last mixture into the red batter, folding it in gently by hand. Scrape the batter into the prepared pans.

Bake at 350F for 20 to 25 minutes until the layers are spring back when touched lightly in the centre and are just beginning to pull away from the sides of the pans.

Cool the cakes in the pans on wire racks or folded kitchen towels for 15 minutes. Then turn them out onto the racks, remove the paper and turn top side up again to cool completely.

Combine the milk and flour in a small or medium saucepan. Cook over medium heat, whisking or stirring often until the mixture thickens almost to a paste, around 2 to 4 minutes. Remove from the heat and scrape it into a small bowl to cool completely.

Meanwhile, beat the butter with a mixture at high speed until light and fluffy. Add the sugar in thirds, beating well each time until the mixture is creamy and fairly smooth. Add the cooled milk and flour mixture and beat for 1 to 2 minutes, scraping down the sides now and then to combine everything well. Using a large spoon or spatula, stir im the vanilla, coconut and pecans, mixing to combine everything well into a thick, fluffy, nubbly icing.

Place one cake layer top side down on a cake stand or serving plate. Spread a third of the icing on top. Place the second layer, top side up, on top. Frost the sides and then the top of the cake with the remaining icing. Refrigerate for 30 minutes to help the icing set.

NOTE: If you can’t find buttermilk, stir 1 tbsp lemon juice or vinegar into 1 cup of milk and leave to stand for 10 minutes before using.